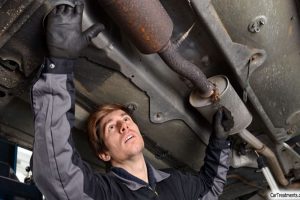 Next, look at the pressure gauge. If the pressure is low, the valvetrain parts may react noisily. Low oil pressure may be due to an oil pump that has developed a blockage or become worn, or a filter that has become clogged. If you live in a cold area, valvetrain noise may be partly due to using an oil with a heavy viscosity. Switching to a lighter viscosity may reduce the noise.

Deep knocking is caused by severely worn or damaged bearings. It is prevalent in older vehicles, especially those in which the owner has neglected to change the oil and filter on a routine basis. The wearing and damage can also be caused by aggressive driving habits, loose bearings, and adjoining rod bolts that have sustained damage.

It is a serious problem; if you hear knocks, have a mechanic resolve it quickly. Your engine will either seize up or one of the rods will break. In both cases, an overhaul or replacement will be necessary.

One option is to simply replace the bearings. But, that is merely a stop-gap measure. Chances are if the bearings are damaged, a mechanic will need to resurface the crankshaft. That can be expensive.

Pinging can be caused by overheating, low-quality gas, carbon deposits within the combustion chamber, or a failing EGR valve. The main symptom is an erratic detonation of fuel. Over time, it can lead to severe damage to the head gasket, pistons, and rod bearings.

Each form of engine noise described above may seem relatively benign in the beginning. A subtle clicking, knocking, or pinging might not imply a sense of urgency. They should. These noises will gradually grow more pronounced. As they do, they promise damage to critical parts. If you hear them, take your car to a repair garage and ask a mechanic to fix the underlying problem. With a little luck, you’ll avoid an expensive overhaul.

Save On Car Repairs: Cut Down On Car Engine Oil And Fuel Fees